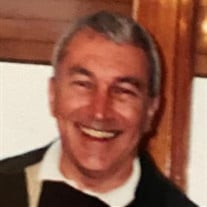 Barry N. Lozuke, Esq., age 74, of Venice, Florida, formerly of Wenonah, NJ passed away on August 13, 2021. A caring and distinguished gentleman universally recognized by those who knew him as a man of great integrity, loyalty, generosity, and gentleness of spirit. He was the consummate professional admired and respected by his clients and legal colleagues alike as an attorney truly devoted to the practice of law and honoring the integrity of his craft while being a passionate advocate for his diverse clientele. Barry was an established and respected authority in municipal law, particularly planning and zoning, and a member of the United States Supreme Court Bar, having had the honor of being sworn in to this prestigious bar with his son, Brian, in 2007. Barry passed peacefully at age 74 after a long courageous battle with cancer surrounded by his loving wife and children by his side. He was a humble, impeccably dressed, and meticulous man that never sought attention in the limelight, preferring instead to make those around him shine, particularly his wife and family. Barry was raised in Deptford and enjoyed playing football for the Deptford Midget and High School football programs in his younger years, along with trips to the track with his Uncle Frank to bet on the horses. Barry also enjoyed traveling with his wife and family and had a long history of community involvement first serving on the Deptford M.U.A.; founding member of the Deptford Township Elks Club; serving as First Assistant Prosecutor with the Gloucester County Prosecutor’s Office; and decades of service to the Borough of Woodbury Heights as Solicitor where he raised his family. In retirement, Barry enjoyed serving as a member of the Golden Strand HOA, where he spearheaded various capital projects and formed new friendships with the residents. Barry is survived by his beloved wife Clare (nee Stratton); devoted father to Brian; Glenn (Virginia); Ilene; and Christian; and loving grandfather to Sarah, Meghan, Caitlin, Ava Grace, Ethan, Magnus, Thorin, Jaiden, Jamison, and Lelu. Dear son of the late Nicholas and Elda Lozuke and brother to the late Deborah (Debbie) Phillips. In lieu of funeral services, the family respectfully asks that donations be sent in Barry’s memory to honor his generous nature to a charity close to your heart or to the Leukemia & Lymphoma Society, Donor Services, P.O. Box 98018, Washington, DC 20090-8018. The family also welcomes sharing memories, which may be posted and shared at www.boucherfuneralhome.com.

Barry N. Lozuke, Esq., age 74, of Venice, Florida, formerly of Wenonah, NJ passed away on August 13, 2021. A caring and distinguished gentleman universally recognized by those who knew him as a man of great integrity, loyalty, generosity, and... View Obituary & Service Information

The family of Barry N. Lozuke, Esq. created this Life Tributes page to make it easy to share your memories.

Send flowers to the Lozuke family.