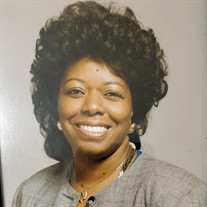 Ella Maude Cintron was called to eternal rest and peace on February 26, 2021 from the Samaritan Center at Voorhees. Ella was born October 31, 1944 in Kingstree, South Carolina. She was the daughter of the late Reverend Jackie Harvey Fulton and the late Dorothy Mae Fulton-Singletary. Ella was educated in the public schools of Kingstree, South Carolina. Upon graduation she moved to Camden, New Jersey. Ella was raised in a devout Christian household. She was a member of the various churches that her father pastored in South Carolina. In her late teen years, when Ella joined Harris Temple church in Camden, New Jersey she was the morning worship leader. Ella had a melodious voice and was often called on to sing The Lord’s Prayer. While living in New Jersey, she met and married the love of her life, the late Julio H. Cintron in 1968. Ella was employed as the Director of Employment and Training for the Department of Labor of the State of New Jersey and for the Gloucester County Department of Aging. Ella was a family oriented person. She LOVED her family and friends and was known as the ultimate host. Ella was a kind, compassionate and giving person. When you visited Ella, she treated you like royalty. Ella was joined in matrimony to the late George Ronald Johnson. They often traveled the globe to include stops in Alaska, The Caribbean, Australia, Europe, Africa, Italy, Spain and Dubai to name a few. She and Ron spent many years traveling and creating lasting memories. In her senior years, she joined the Faith Temple Baptist Church in Williamstown, New Jersey where she served as a Deaconess with her husband Ron. Ella was preceded in death by her beloved husband George Ronald Johnson, her mother Dorothy Mae Fulton Singletary, her father the Reverend Jackie Harvey Fulton, and her sister Virginia (David) Graham of Kingstree, SC. She leaves to cherish her memory her sister Evangelist Willeas (Dan) McMillan, York, Pennsylvania, her special cousin and caregiver Diane Singletary, Williamstown, NJ; caregiver Phyllis Ausby, Sicklerville, NJ; sisters-in-law Nereida “Sonny” Cintron; Agnarda “Aggie” Palsha, Clearwater, FL; Patricia Douglas, Kingstree, SC, Ona Taylor, Pittsburgh, PA; brothers-in-law James Robinson, Danville, CA; William Ripley, Newark, DE, George Freeman, Pittsburgh, PA, Adolph Johnson, Pittsburgh, PA and step children Mavis McHenry, Lynell Johnson, ShaRon Johnson-Bynum (Glenn), Terri Johnson-Hart (DeWayne), Aaron Johnson (Ashleigh) as well as a host of family and friends. Acknowledgements We are deeply grateful for all the expressions of kindness, love and caring words you have shared with us during our bereavement for our loved one. May God continue to bless each of you. The Family Arrangements by BOUCHER FUNERAL HOME, Deptford. For condolences and to view Ella's Video Tribute visit www.boucherfuneralhome.com.

Ella Maude Cintron was called to eternal rest and peace on February 26, 2021 from the Samaritan Center at Voorhees. Ella was born October 31, 1944 in Kingstree, South Carolina. She was the daughter of the late Reverend Jackie Harvey Fulton... View Obituary & Service Information

The family of Ella Maude Cintron created this Life Tributes page to make it easy to share your memories.

Ella Maude Cintron was called to eternal rest and peace on February...

Send flowers to the Cintron family.