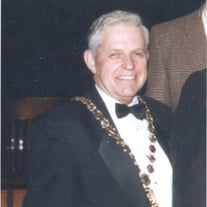 Frank A. Tarpy of Deptford entered into Glory on January 19, 2018 at the age of 78. Son of the late Edward W. Tarpy, Jr. and Lila (nee Foulk). Loving brother of Joseph Tarpy (Eileen) of Deptford, Lila Doak (Edward), John Tarpy (Eleanor) of Deptford, Louise Brown of Delaware, George Tarpy (Gale) of Deptford and the late Edward W. Tarpy III (Verna) of Deptford. Also survived by many nieces and nephews and great- nieces and great-nephews. Frank was a Partner in the family owned E.W. Tarpy & Sons, Inc. of Deptford and Master Plumber of the State of NJ. He was a Master Mason (33rd Degree PDDGM) of the Mantua Lodge No. 95; a Royal Arch Mason of Joshua Chapter No. 51 of the Grand Chapter of Royal Arch Masons of the State of NJ and a member of the Scottish Right of Freemasonry, Collingswood. He was a Lifetime member of the Almonesson Lake Fire Department, Deptford and served as Fireman, Assistant Chief and President. He was a Lifetime member of the Fireman’s Association of the State of NJ. He served on the Deptford Township Fire Commission from 1978 to 1991 and as a Chairman from 1987 to 1991. He was a long-standing member of Calvary Bible Church of Deptford. Frank honorably served his county in the United States Army National Guard. Frank’s love for the outdoors endured throughout his life and was a great source of enjoyment and peace. He enjoyed fishing with friends and spending time with his family in the Poconos. Relatives and friends are invited to a viewing on Friday, January 26, 2018 from 7pm to 9pm and Saturday, January 27, 2018 from 9am to 10am in The Chapel at BOUCHER FUNERAL HOME, 1757 Delsea Dr., Deptford, NJ 08096. Masonic Services Friday 8pm. Funeral Service Saturday 10am in the Chapel at the funeral home. Interment Eglington Cemetery, Clarksboro. In lieu of flowers donations may be made to Almonesson Lake Fire Department, 1700 Almonesson Rd., Deptford, NJ 08096. For directions, to sign online guest book and to view Frank’s Video Tribute visit www.boucherfuneralhome.com.

The family of Frank A. Tarpy created this Life Tributes page to make it easy to share your memories.

Frank A. Tarpy of Deptford entered into Glory on January 19,...

Send flowers to the Tarpy family.