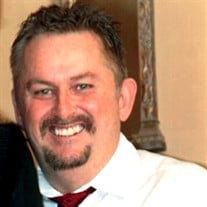 Garnett J. Rodgers, Jr. “Garry” on February 29, 2020 of Deptford. Age 61. Son of the late Garnett J. Rodgers, Sr. “Jack” and Catherine “Kay” (nee Colbert) Rodgers. Father of Garry F. Rodgers of York, PA. Brother of Patty Boyer (Tom) of Mantua, Sherry Dudley (John) of Glassboro, Debbie Hopely of Thorofare and Rick Rodgers (Laraine) of Deptford. Grandfather of Raymond McAteer. Uncle “Garry Gorgeous” to Amanda (Mike), Matthew, Mark (Emily), Ricky (Nichole), Ashley and the late Eric. Great-uncle of Arabella, Sophie, Brielle and Michael. Garry was an avid Philadelphia sports fan. He was a very generous person and loved animals, fishing, hunting and dancing. He was always smiling and was very patriotic. One of Garry's mottos in life was "Don’t always tell people you love them...show them". That love was demonstrated throughout his entire life. His brother Ricky knew that more than anyone else...he was his best friend and mentor. He could not have hoped for a better brother. He loved his son Garry and grandson Raymond and always believed for the best for their lives. We all knew of that love when he gave of himself with his unforgettable smile and endless stories that brought laughter to any occasion. He was admired for his work ethic and his passion for doing the right thing. His generosity was displayed in countless ways. His famous name "Garry Gorgeous" began when he started giving his nieces and nephews a dollar each time, they said his name. Among his favorites in life were Philadelphia sports, traveling and attending sporting events with his nephew Ricky, seeing sunsets, Christmas giving, and his tree. Among his favorites were his loving friends Rose, Barb, Dave, and Sue. He loved Dave's cooking, cooking for friends, and the times he spent fishing with family in the mountains. Some of his best and craziest times in life were the days he spent with Mega and his lifetime friends. His friends for life are too long to list, but you all know who you are. He was one in a million. Garry had amazing faith. He believed in prayer. His very words were "If you keep on praying, I will keep fighting". We kept praying and he fought a courageous battle. He never stopped believing. And as Garry would say to you..."Thank you for all you do for me". Relative and friends are invited to attend a viewing Thursday, March 5, 2020, 8:30am to 11am in The Chapel at BOUCHER FUNERAL HOME, 1757 Delsea Dr., Deptford, NJ 08096. Funeral Service 11am in The Chapel at the funeral home. Interment Eglington Cemetery, Clarksboro. In lieu of flowers donations in Garry’s memory and his love for his children may be made to Kid’s Alley, P.O. Box 594, Audubon, NJ 08106. Kid’s Alley is a Faith Based Children’s Charity that the family helps with yearly coat drives. DUE TO A SEVERE ALLERGY, PLEASE DO NOT SEND LILLIES. For directions, to sign online guest book and to view Garry’s Video Tribute visit www.boucherfuneralhome.com.

The family of Garnett "Garry" J. Rodgers, Jr. created this Life Tributes page to make it easy to share your memories.