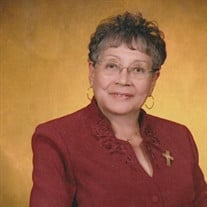 Greta was born on August 20, 1931 in Philadelphia, Pennsylvania. She was the second child born to James Henry Gaines, Sr. and Mary Alice (Battle) Gaines. Their first born was James (Jimmy) Henry Gaines, Jr. who preceded her in death and their... View Obituary & Service Information

The family of Greta Irene Brown created this Life Tributes page to make it easy to share your memories.

Send flowers to the Brown family.