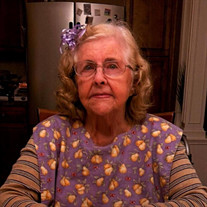 Helen M. Troxell, 94 years young passed on June 6, 2020. A long time Deptford Township resident was predeceased by her husband John E. Troxell and sister Margaret Kirby. Helen is succeeded by 7 children, 14 grandchildren and 22 great-grandchildren. Beyond being a dedicated mother Helen was a tireless community and social activist. Growing with the developing Deptford Township, she served on numerous township committees for the aged and senior services. With her husband she aided in developing the Deptford Little League and Elks Club services for the handicapped. Helen was a member and a past president of the Gloucester County and State Women’s Club. She actively supported St. Patrick’s Church and School and served on the original Ecumenical Council. A tireless supporter of local and state officials she was frequently recognized by mayoral, governor, and congressional representatives for her dedication of service. Helen and her husband were loyal contributors and participants in numerous charitable activities and developed a wide array of appreciative friends. She will be sorely missed and her memory and past efforts continue to benefit all who knew her. Loving wife of the late John E. Troxell. Treasured mother of John Troxell, IV (Sherrie) of Medford Lakes, Janet Cook (the late Bob) of Westville, Robert Troxell (Gail) of Deptford, Thomas Troxell (Christine) of Bensalem, Donald Troxell (Jennie) of West Deptford, Elaine Troxell-Greco (John) of Marlton and Gary Troxell (Kellie) of Florida. Cherished sister of the late Margaret Kirby. Dear grandmother of 14 and great-grandmother of 22. Due to the restrictions set forth by the State of New Jersey, services will be private. Private interment at Gloucester County Veterans Memorial Cemetery, Williamstown. In lieu of flowers, memorial donations may be made in Helen’s name to St. Jude Children’s Research Hospital, 501 St. Jude Place, Memphis, TN 38105 or Wounded Warrior Project, P.O. Box 758517, Topeka, KS 66675. Arrangements by BOUCHER FUNERAL HOME, Deptford. For condolences, to sign online guest book and to view Helen’s Video Tribute visit www.boucherfuneralhome.com.

The family of Helen M. Troxell created this Life Tributes page to make it easy to share your memories.

Send flowers to the Troxell family.