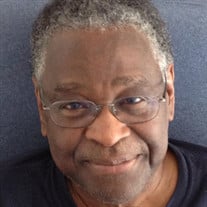 Issac “Ike” Dow, Jr was born on September 14, 1944, in Camden, South Carolina to Bernice Kelly and Issac Dow, Sr. He had two brothers: Almo (who preceded him in death), and Wallace Spellman, whose close company was enjoyed and cherished by Ike regularly. On May 9, 1969, Ike married the love of his life, Cynthia Moody, enjoying 51 years of marriage together. Their union produced three children: Craig, Cameron and Kelly, and three grandchildren: Morgan and Raven Dow, and Aubrey Sidowy. Ike worked for the New York Police Department and retired as a Detective with the Housing Authority. During his career, Ike enjoyed being an integral part of the Police Department’s Bowling League where he won many awards and trophies over the years. After retirement, Ike struggled with complications from diabetes and while it was tough for him, he never lost his bright outlook on life. He was a very proud man; an independent man never wanting to be a burden on others. Eventually, in his free time he would read the Bible for comfort and began studying with Jehovah’s Witnesses. Ike enjoyed what he learned and it had a very positive effect on his life. Sadly, COVID-19 took over his life rather suddenly, however thoughts of happier times will remain in our hearts and minds. Ike’s kindness and generous spirit will be missed. He believed in the Bible’s promise of a resurrection of the dead (Acts 24:15), and we look forward to seeing Ike’s bright, wide smile and hearing his hearty laugh once again in the near future. Issac is survived by his wife Cynthia, his three children and grandchildren, daughters-in-law Renee and Takeyce, son-in-law Alex Sadowy, his brother Wallace Spellman, and a host of loving friends and relatives who have enjoyed many good times with him and will remember him fondly. Services are private

Issac &#8220;Ike&#8221; Dow, Jr was born on September 14, 1944, in Camden, South Carolina to Bernice Kelly and Issac Dow, Sr. He had two brothers: Almo (who preceded him in death), and Wallace Spellman, whose close company was enjoyed and cherished... View Obituary & Service Information

The family of Issac Dow created this Life Tributes page to make it easy to share your memories.

Send flowers to the Dow family.