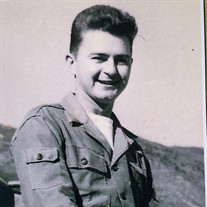 James (Jim) P. Festenstine was born to Jacob and Mabel (née O’Hara) in Philadelphia, PA on August 6, 1930. He passed away peacefully at home in Cherry Hill, NJ on December 28, 2020. He was the husband of the late Doris Festenstine (née Huffnel), father to Michelle Gugel (married to William) and Carolynne Freese (married to Andrew), grandfather to Sydney, Jake, Amber and Emma, and great grandfather to Bentley. Among many other relatives and friends, he will be particularly missed by his nephew and best friend, Jim Hatala. He also leaves behind two pets, his dog, Bella and his horse, Faith. Jim served in the US Army during the Korean War, as a fireman and with combat artillery. He battled the devastating fire along the 38th parallel in Pusan, and received numerous medals for his courage and service to his country. Upon returning from Korea, he worked as a boiler operator, ran the family farm and with other family members owned and created Lions Lake Park in Voorhees, NJ, which has become a historic park. Thereafter, he became a jitney owner and driver in Atlantic City. In retirement, he focused on spending time with his family and enjoyed frequent cruises with his wife, Doris. He relished playing his guitar and having many conversations with family and friends for whom he served as mentor and confidante. His large circle of friends and family will sorely miss his big grins, warm personality and deep insights. Relatives and friends are invited to a visitation Wednesday, January 6, 2021 from 2pm to 3pm in The Chapel at BOUCHER FUNERAL HOME, 1757 Delsea Dr., Deptford, NJ 08096. Religious service to follow at 3pm in The Chapel at the funeral home. Interment Private. MASKS MUST BE WORN IN THE BUILDING AT ALL TIMES COVERING NOSE AND MOUTH.

James (Jim) P. Festenstine was born to Jacob and Mabel (née O&#8217;Hara) in Philadelphia, PA on August 6, 1930. He passed away peacefully at home in Cherry Hill, NJ on December 28, 2020. He was the husband of the late Doris Festenstine (née... View Obituary & Service Information

The family of James P. Festenstine created this Life Tributes page to make it easy to share your memories.

Send flowers to the Festenstine family.