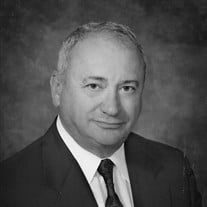 James F. Parry on September 27, 2019 of Deptford. Age 82. Loving husband of Augusta J. (nee Fischer). Beloved father of James Parry (Diane) of Mt. Royal. Brother of Ann Shay (Rich) of Philadelphia and Joan Nichlas (Joe) of Florida. Devoted grandfather of Nolan and Olivia. Jim was born in Philadelphia and resided in Deptford, NJ for 49 years with his wife Janet. He was married to his beloved wife for 59 years. In his younger years he was a member of the Bel-Airs Band with two others who would later become his brother in laws. He also had a pilot license and enjoyed flying small planes. Later in life he enjoyed fishing and relaxing at his Brigantine, NJ summer home and also loved to travel. Along with his wife, he traveled to many places including Australia, Europe and Hawaii. He was a longtime member of both the Hegeman and Joseph A. Ferko string bands in which he played the saxophone. He loved his grandchildren and enjoyed spending time with them, especially going to see them at their sporting events. In 1959, Jim graduated from Drexel University with a BS degree in Civil Engineering, he immediately joined the US Army Corps of Engineers as a 1st Lieutenant in the Heavy Construction Battalion. He served on Active Duty until 1962, when he went to work for John D. Lawrence, Inc., in Westville. A New Jersey Licensed Engineer since 1966, Jim became President and CEO of John D. Lawrence, Inc. in 1988, overseeing company operations and project management for numerous large industrial, institutional and commercial projects. He continued to work until 2019. Today the firm is more than a century old. Jim served as President of BCANJ in 2005 and 2006. He was also President of the Building Contractors Association of South Jersey, the Gloucester/Salem Engineers Society and the YMCA of Gloucester County. In addition, he was Co-Chair of the New Jersey Carpenters Funds, as well as a past Trustee on the Cement Masons Funds. He was a Charter Member of New Jersey Professional Engineers in Construction. Jim was also a National Director of the Associated General Contractors of America, representing New Jersey. Relatives and friends are invited to a viewing on Friday, October 4, 2019 from 7pm to 9pm in The Chapel at BOUCHER FUNERAL HOME, 1757 Delsea Dr., Deptford, NJ 08096. A Mass of Christian Burial 10am on Saturday, October 5, 2019 at St. Joachim Parish at Annunciation Church, 601 W. Browning Rd., Bellmawr, NJ 08031. Interment Calvary Cemetery, Cherry Hill. For directions, to sign online guest book and to view James’ Video Tribute visit www.boucherfuneralhome.com. PLEASE CHECK BACK LATER FOR VIDEO TRIBUTE

The family of James F. Parry created this Life Tributes page to make it easy to share your memories.

Send flowers to the Parry family.