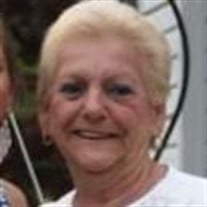 Jennie Zappardino (nee Pomykacz) on March 18, 2020 of Deptford. Age 75. Wife of the late Frank Zappardino. Loving mother of Joanne Eichenberg (the Late George W. Jr.) of Deptford, Nicholas Policella, Jr. (Michele) of Florida, Thomas Policella (Elizabeth) of West Deptford and Renee Witkowski (Dave) of Deptford. Grandmother of Brian, Jason (Maria), Michael (Tricia), Jennifer (Pat), Nicholas III, Caitlin (James), Briana, Dawson, Natalie, Justin, Courtney, Hailey and Ariana. Great grandmother of Aubrey, Aiden, JoJo, Patrick, Connor, Kensley and Jordan. Loving sister to Ben and Stefanie, and an amazing Aunt to many nieces and nephews. She was preceded in death by her parents, Bruno and Mary Pomykacz (nee Pantalone); her brother and sister-in-law, Will and Vivian; and her son-in-law, George Eichenberg, Jr. Jennie was born on January 8, 1945 in Philadelphia, Pa. She later moved to New Jersey in 1969 to raise her family with her former husband, Nicholas Policella, Sr. After 25 years, she retired from Bank of American and continued to do the things she loved most. Jennie enjoyed spending her time listening to oldies, dancing, and going to the casinos. Most importantly, she loved being with her children, grandchildren and great grandchildren. Services Pending. Arrangements by BOUCHER FUNERAL HOME, Deptford. In lieu of flowers, the family is asking for donations to be made to https://vitascommunityconnection.org/. For condolences visit www.boucherfuneralhome.com

The family of Jennie Zappardino created this Life Tributes page to make it easy to share your memories.

Send flowers to the Zappardino family.