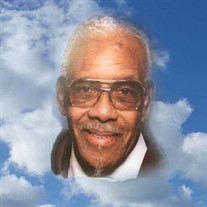 John William Spencer, Sr. went home to be with the Lord on June 24, 2018, leaving a wonderful legacy of love that touched many lives. Johnnie, as he was affectionately known to his family and friends, was born on March 9, 1928, in Philadelphia, PA to the late Arkell F. Spencer Sr. and Sara Oliver Spencer. He attended elementary school in the Philadelphia School System until moving to New Jersey with his family in his early pre-teens. Johnnie accepted Christ into his life at an early age and worshipped at First Baptist Church of Jericho for many years. He was a proud graduate of the Bordentown Manual Training School Class of 1946 where he was the Salutatorian and Vice President of his class. Following Johnnie’s graduation, he enlisted in the United States Army where he served 18 months and received an honorable discharge. After his discharge, Johnnie attended Barber School and Interior Decorating School. On February 25, 1950, Johnnie eloped with his sweetheart Rose Bayard; they were married in Elkton, MD. and from this blessed union of almost 57 years, five children were born. Johnnie was always a very proud man and no job was ever too big or too small for him to handle in order to provide for his family. He had a very diverse job history and worked for several companies including Campbell Soup, Frito Lay, Prudential Insurance and was the owner of his own barber shop for many years. In 1994 after 20 years of service, he retired from Texaco/Coastal Oil Refinery as a Fireman/Gateman. Singing God’s praises was one of Johnnie’s biggest passions in life. He was known and respected for his melodic tenor voice, his vast musical knowledge and gentle and confident leadership style. Johnnie served as a mentor for many Men’s choirs in the region. He served as a member and musical director of the Kingdom Heirs Acapella Gospel Group for over 20 years. Johnnie was the beloved husband of the late Rose D. Spencer (nee Bayard) and was predeceased by his stepmothers, Edith Oliver Spencer and Mildred Muse Spencer, and brothers Arkell, Murray, Robert and Bernard Spencer. He leaves to cherish his memory his children, John Jr./Lumpy, Irvin (Ramona), Lyetta (Beverly), Valerie and Veronica Lofton (Carnell); Sister, Beverly Spencer-Ockimey, Daughter-in law, Shirley Spencer, two Sister-in laws, Marie McNair and Estelena Bayard; God-Daughter, Antoinette Arnold-Rudisill and special family friend, Christine Huesser; ten grandchildren, Calvin (Tracy), Ginnie Calabrese (Mike), Christina Alexander (Al-Rakeesh), Patricia, Irvin Jr., James, Ativa Hall (Dainel), Aisha, Tatiana Lofton and Carnell Lofton, Jr.; and a multitude of great-grandchildren, nieces, nephews, cousins and friends. Relatives and friends are invited to visitation on Saturday, July 7, 2018 from 10am to 11am at The Rock Church, 205 Esplanade Ave., Pitman, NJ 08071. Celebration of Life Service 11am at The Rock Church. Interment private. In lieu of flowers donations may be made to Alzheimer’s Assoc. Delaware Valley Chapter, 399 Market St., Ste. 102, Phila., PA 19106 or The Rock Church. For directions, to sign online guest book and to view John’s Video Tribute visit www.boucherfuneralhome.com. PLEASE CHECK BACK LATER FOR VIDEO TRIBUTE

John William Spencer, Sr. went home to be with the Lord on June 24, 2018, leaving a wonderful legacy of love that touched many lives. Johnnie, as he was affectionately known to his family and friends, was born on March 9, 1928, in Philadelphia,... View Obituary & Service Information

The family of John William Spencer, Sr. created this Life Tributes page to make it easy to share your memories.

John William Spencer, Sr. went home to be with the Lord on June...