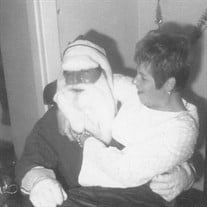 Mary Janice Sargent “Jan” (nee Bergen) of Deptford left us on August 24, 2021. Wife of the late James F. Sargent, Sr. (“Jim”). Loving mother of Deborah Lowery (the late David, Sr.) of Deptford, Dr. Laurie A. Sargent of Pennsylvania, James F. Sargent, Jr. of Deptford, Karen M. Morrow (Scott) of Hawaii, and Kimberly J. Sargent-DeJoseph (Ken) of Deptford. Beloved sister of Joan Ann Guerrera of Florida and the late Barbara Jean Bergen. Devoted grandmother of Christina, Tiffany, Kevin, Ian, Dylan, Kaitlin, Sean, Danielle, Mike, Ken, Jr., Casey, Drew, and the late David J. Lowery, Jr. Great-grandmother of thirteen and the late Aaliyah Joy. Jan was born in South Philadelphia, the middle of three girls, and grew up on Johnson Street. She graduated from Hallahan Catholic Girls High School, the country’s first all-girls diocesan Catholic high school. She met Jim while in school and they married shortly after graduation. Jim joined the Marines and transferred to the Air Force and Jan moved wherever Jim was stationed and found employment as a secretary or waitress just to be near him. Upon discharge from the Air Force, Jan and Jim bought a home in Deptford and by the time she was 26, Jan was raising their five children. Jan was an avid reader. She sewed, crocheted, and made dolls. Jan fawned over every baby she ever laid eyes on, and for her, life revolved around Christmas. She shopped all year long to create magical Christmas mornings for her children, grandchildren and great grandchildren. Jan wore many hats over the years ranging from wife to mother to being Jim’s right hand girl and supporting him with the Sunoco and Getty stations they owned, with the J & J Auction business they formed, or with Jim’s Family Handyman business. As the children grew and began moving away, Jan re-entered the work force as a secretary with Maytag Appliances, AIG Insurance, and Allstate Insurance. Sadly, Jim became ill and left us on August 15, 2003. A few years later, Jan retired from Allstate and, for the remainder of her life, traveled around the country spending time with her daughters in New Jersey, Maryland, Hawaii, Georgia, Pennsylvania and Las Vegas. Jan spent thousands of hours reading on the steps of the pool on Madison Avenue. She enjoyed the beach every day in Kauai, squeezing the most out of every minute. And in Vegas, she traveled the city limits to local bars and casino lounges to dance and sing along to country entertainer Sam Riddle. Her Vegas friends describe her as “spicy” and “full of class” and she never left the house without hair and makeup. Jan was one tough cookie, and she endured a lot these past few years. With daughters Laurie and Kimi by her side, Jan slipped away in the early morning hours of Tuesday, August 24, just a few hours beyond Jim’s birthday. It is certain that she was greeted with open arms by her parents, sister Barb, grandson David and great granddaughter Aaliyah Joy, and that she and Jim are dancing to her favorite song, “Love is a Many Splendored Thing.” Relatives and friends are invited to a viewing on Saturday, August 28, 2021, from 10:00 a.m. to 11:00 a.m. in The Chapel at BOUCHER FUNERAL HOME, 1757 Delsea Dr., Deptford, NJ 08096. Funeral Service 11:00 a.m. in The Chapel at the funeral home. Interment Lakeview Memorial Park, Cinnaminson, New Jersey. In lieu of flowers donations may be made to St. John of God Community Services, 1145 Delsea Dr., Westville, NJ 08093. For directions, to sign online guest book, and to view Jan’s Video Tribute visit www.boucherfuneralhome.com. CDC NOW ADVISES UNVACCINATED AND VACCINATED PEOPLE WEAR MASKS INDOORS.

The family of Mary Janice Sargent created this Life Tributes page to make it easy to share your memories.

Send flowers to the Sargent family.