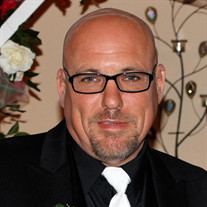 Michael J. Hedrich on February 17, 2019 of Gloucester Township. Age 46. Loving husband of Christi L. Reilly. Beloved son of Joseph F. Hedrich and Dawn L. (nee Gear). Devoted father of Aria Mazey (15 months). Brother of Kathleen Hedrich (Drew Blagojevic). Uncle of Corinne and Evan. Grandson of Mickey Gear and nephew of Donna Schwartz (Andrew) and Melanie Scarcella (William). Mike was a Construction Inspector for Underwood Engineering in Bellmawr, NJ where he met his wife. Mike grew up as a “Coast Guard kid” and lived in Chester, PA, Charlevoix, MI, Cape May, NJ, and Governors Island, NY. At the age of 10, the Hedrich family settled down in Prospect Park, PA where Mike graduated from Interboro High School in 1990. One of his favorite memories of high school was being part of the Bucs’ 1989 Del-Val Championship Soccer Team nicknamed the “Shamdoggies”. He also attended West Chester University. As a kid, Mike spent his summers in Ship Bottom, NJ (Long Beach Island) as part of the unofficial “15th Street WaveRiders.” Mike moved to Deptford, NJ in 1998 where he would later find a job as a groundskeeper at Wedgwood Country Club. Mike joked that he took the job so that he could golf for free, but Wedgwood eventually became his second home. Mike was a huge Eagles fan and even proposed to Christi on the field at Lincoln Financial Field. He had the gift of gab and had a “guy” for everything. Mike had a heart of gold and a smile for everybody. His proudest moment was when he became a father on November 15, 2017 and he adored his “Princess.” Mike nicknamed Christi “Mazey” (short for amazing), which they chose as the perfect middle name for their beautiful baby girl. Relatives and friends are invited to a viewing on Thursday, February 21, 2019 from 7pm to 9pm and Friday, February 22, 2019 from 10am to 11am in The Chapel at BOUCHER FUNERAL HOME, 1757 Delsea Dr., Deptford, NJ 08096. Funeral Service Friday 11am in The Chapel at the funeral home. Interment New St. Mary’s Cemetery, Bellmawr. In lieu of flowers donations may be made to Camden County Council on Alcoholism and Drug Abuse, 1 Alpha Ave. Suite 22, Voorhees, NJ 08043. For directions, to sign online guest book and to view Hed’s Video Tribute visit www.boucherfunealhome.com.

The family of Michael J. Hedrich created this Life Tributes page to make it easy to share your memories.

Send flowers to the Hedrich family.