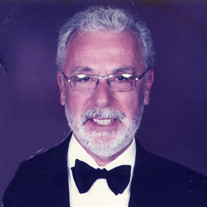 Ralph M. Caliri passed peacefully on December 17, 2018 at his home in Mays Landing, NJ at the age of 85. Ralph is survived by his wife, Cheryl (nee McGraw) and his daughters, Andrea Caliri of Sharon, MA and Erica Simmons and her husband, Charles Of Cherry Hill, NJ. Stepdaughters, Hilary Van Horn of Mays Landing, NJ and Noelle Van Hendrick and her husband, Eric of Brookline, VT and grandchildren Andrew, Jessica, Michael, Sydni, Jon, Aaron, Evan, Grayson, Avery, and Ozzie. Brother of Louis Caliri (Gerry) of Delaware and Mary Salemmo of Arizona. Ralph is a lifelong resident of the Philadelphia area, graduating from Temple University with a Bachelor’s Degree in Accounting. After graduating Temple, he was employed by Price Waterhouse and became a Certified Public Accountant. Remaining in the field of Finance and Accounting, he joined Drexel Harriman Ripley as VP of Finance and Treasurer, and then moved on to AVC Corporation (then parent company of WPHL TV 17), as VP of Finance. In 1972, Ralph was named President and General Manager of Channel 17 where he remained until 1975. From there he formed Haddon Holidays, specializing in group travel to Hawaii, Australia and New Zealand which grew to one of the largest providers of vacations to the Pacific. Ralph retired in 1998 when Haddon Holidays was sold into a roll-up, and the company was taken public. Ralph impacted many with his wisdom, guidance and generosity of spirit. Continuing his legacy, Earth Angels for Dementia was formed to care for caregivers of those impacted with Dementia. Relatives and friends are invited to a viewing on Friday, December 21, 2018 from 10am to 12pm at Godfrey Funeral Home, 4008 English Creek Ave., Egg Harbor Twp., NJ 08234. Funeral Service 12pm at the funeral home. Interment Atlantic County Veterans Cemetery, Mays Landing, NJ with Military Honors. In lieu of flowers donations may be made to Earth Angels for Dementia at www.earthangelsfordementia.org. Arrangements by BOUCHER FUNERAL HOME of Deptford. For condolences and to view Ralph’s Video Tribute visit www.boucherfunerlahome.com.

Ralph M. Caliri passed peacefully on December 17, 2018 at his home in Mays Landing, NJ at the age of 85. Ralph is survived by his wife, Cheryl (nee McGraw) and his daughters, Andrea Caliri of Sharon, MA and Erica Simmons and her husband, Charles... View Obituary & Service Information

The family of Ralph M. Caliri created this Life Tributes page to make it easy to share your memories.

Send flowers to the Caliri family.