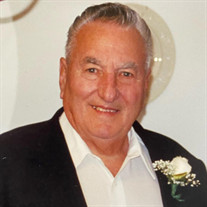 In the blink of an eye God called you home. With heavy hearts, we announce the passing of Robert Gray of Deptford, NJ at the age of 86. Robert passed away at home on Wednesday, September 23, 2020 just three short months after the passing of his loving wife of nearly 65 years, Myrtle May. Devoted father of Robert (Tony), David (Jennifer), Steven (Stacey), and John (Stacy). Loving brother of Donald (Shirley) and Norman. Cherished Poppy of Devon, Brandon, Hannah, Ryan, Matthew, Jordan, and Gavin. Robert is also survived by many loving nieces and nephews. Robert is predeceased by his brothers Joseph, William and sister Louise (Hentz). Robert was born and raised in Woodbury Heights, NJ to Joseph and Marie (nee Hohschopf). Robert was drafted into the US Army during the Korean War and was honorably discharged as an SP4 in 1962. After completing his service to our country, Robert worked at Chicago Bridge and Iron Company as an ironworker. He studied electrical trades and then worked in the meat packing industry with his father. He also worked for his brother Donald at American Stainless and Aluminum Products Corporation. He then continued his passion in the electrical trades at the Philadelphia Naval Shipyard Shop 51 as an electrical technician where he retired in February 1995. During his time at the Naval Shipyard, Robert was in charge of the catapult and arresting gear systems, hangar bay division doors, and the reflector shield during the refurbishing of the USS Saratoga (CV-60), the USS Forrestal (CV-59), the USS Independence (CV-62) and the USS John F Kennedy (CV-67). He earned many accommodations including The Commanding Officer’s Recognition of Excellence citation. However, his most important job was that of a dedicated husband to his loving wife, father to his four sons and later, a doting grandfather to his seven grandchildren. Robert was baptized into the Seventh-Day Adventist Church and was a devout Christian who studied his bible daily. He held several key board positions within the Woodbury church administration. He was a charitable and God-fearing man that helped build both the Seventh Day Adventist Church of Woodbury and the Delaware Valley Junior Academy. He donated countless hours to the maintenance of the church. He took great pride in sharing the Lord’s word with others. Robert was a loyal man that enjoyed spending time with his family. He had an immense love for travel with his wife and close friends. He loved sharing stories of his many adventures to such places as Williamsburg, Lake Placid, Lake George, Florida, Jamaica, Bermuda, and the Jersey Shore. He always looked forward to holiday meals and gatherings. There was not a job that Robert couldn’t do and would never turn down a request of help from others no matter how big or small. He was kind-hearted and liked to crack jokes. He was a fan of old murder mysteries and country westerns. Robert also enjoyed watching football, especially the Philadelphia Eagles on Sundays with his sons. He was known for his compassion, loving nature, and silent acts of kindness. His memory will live on forever in the hearts of all of those whose lives he impacted. Relatives and friends are invited to a Celebration of his Life on Wednesday, September 30th, 2020 from 10am to 11am in Woodbury Seventh-day Adventist Church, 330 E. Barber Avenue, Woodbury, NJ 08096. A Religious Service will follow at 11am. Interment to follow the service at the Gloucester County Veterans’ Memorial Cemetery, Williamstown, NJ. In lieu of flowers, memorial donations may be made in Robert's name to Fraxa Research Foundation, 10 Prince Place, Suite 203, Newburyport, MA 01950 or www.fraxa.org. Arrangements entrusted to Boucher Funeral Home, Deptford. For directions, to sign online guest book and to view Robert’s Video Tribute, visit www.boucherfuneralhome.com Masks must be worn covering mouth and nose entering the church.

In the blink of an eye God called you home. With heavy hearts, we announce the passing of Robert Gray of Deptford, NJ at the age of 86. Robert passed away at home on Wednesday, September 23, 2020 just three short months after the passing of... View Obituary & Service Information

The family of Robert Gray created this Life Tributes page to make it easy to share your memories.

In the blink of an eye God called you home. With heavy hearts,...

Send flowers to the Gray family.