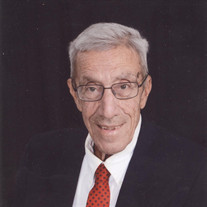 Robert A. Sbarbaro “Bob” on June 14, 2018 of Woodbury, formerly of Brooklyn, NY, Montvale, NJ and Manasquan, NJ. Age 85. Husband of Kathleen Ann (nee Noonan). Father of Robert Sbarbaro (JoAnne) of Harrington Park, NJ, Paul Sbarbaro (Katherine) of Todd, NC and Nancy Mittleman (Marty) of Mullica Hill. Brother of Carol Gavel (Frank) of Wilton, CT. Grandfather of Michael, Rachel, Victoria, Olivia and Jake. Great-grandfather of Colton and Michael. Bob had many loves in his life – first and foremost was his wife Katie who he met when she was only 16 years old while crashing a gathering at the ice cream parlor on the other side of town as his ice cream parlor was being remodeled. His love for her was evidenced by overlooking her menagerie of animals, and by allowing her to dress him up like Howdy Doody and take him square dancing every Thursday night. His other loves included reading the NY Post accompanied by a Thomas’ English muffin with half a stick of butter and a cup of cawfee, yelling “ya jerk” at other motorists and power napping. In 1950 Bob walked through the doors to Wagner College and became a lifelong Seahawk. He received his undergraduate degree in History in 1954, his postgraduate degree in 1977, returned to his alma matter to serve on the Board of Trustees from 1986 to 1998, and received the Wagner Alumni Achievement Award in 1987. Bob was a Korean War Navy veteran, although he got queasy on ships and would get seasick in the bathtub. He was lucky to be able to spend much of his service playing his chosen sport - baseball, and continued to play well into his 70’s. His early career was spent at IBM, Univac and Computax working on the very first computer. The majority of his career was spent at Irving Trust Company/Bank of New York where he had a swanky office on the corner of Wall Street and Broadway which his family loved to frequent during ticker tape parades. Bob was active in his community serving on the Montvale Recreation committee, the Pascack Hills High School Parents Association, the Knights of Columbus and the Board of the Allington Towers Condo Association which was lovingly referred to as “Del Boca Vista”. His fashion sense was unparalleled. While he wore suits to work, when he arrived home he donned “the uniform”, which consisted of a white T-shirt and paint stained plaid shorts. Later in life the uniform morphed into Dockers khaki pants, varying colors of Under Armor collared shirts and Rockport slippers. He had a refined taste in foods and would only eat whatever was put in front of him as long as he didn’t have to make it. His favorite meal was a frankfurter (not a hotdog, a frankfurter) with sauerkraut and mustard – only spicy brown would do, and it should be washed down with a Boylan’s birch beer. In his later years, he spent his time watching Fox News at maximum volume while providing his own colorful commentary. He made yelling at the TV an art form, especially when watching his beloved NY Giants and NY Mets where he berated them about how lousy they were (“they’re all bums”) pretty much every year except 1986. And while he was not usually happy with the players or the coaches, it was the referees who really bore the brunt of his wrath, whether watching professional sports or little league. Relatives and friends are invited to a visitation on Monday, June 18, 2018 from 9am to 11am in The Chapel at BOUCHER FUNERAL HOME, 1757 Delsea Dr., Deptford, NJ 08096. Funeral Service 11am Monday in the Chapel at the funeral home. Interment with military honors will be at the Gloucester County Veterans Memorial Cemetery, Williamstown. In lieu of flowers, a tribute gift may be made in Bob’s memory to The Seeing Eye, P.O. Box 375 Morristown, NJ 07963 or at www.seeingeye.org. For directions, to sign online guest book and to view Bob’s Video Tribute visit www.boucherfuneralhome.com.

The family of Robert A. Sbarbaro created this Life Tributes page to make it easy to share your memories.

Send flowers to the Sbarbaro family.