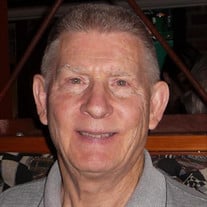 Robert C. Troxel, 88, of Marlton, NJ, died at Wiley Mission on February 11, 2022, with his family by his side. Robert “Bob” was the son of the late Henry and Irene (Cassel) Troxel. He was born in Skippack, PA. He graduated from Royersford High School in Royersford, PA, and Ursinus College in Collegeville, PA. He married Jeane A. Newborn of Royersford, PA, on August 27, 1955, and the couple relocated to Turnersville, NJ, with their five children in 1973. Bob was a Korean War era veteran, serving in the Transportation Corps of the Army from 1953 to 1955. After leaving the Army, he completed his degree at Ursinus and started a career in logistics. From 1960 until his retirement in 1995, Bob worked for metal manufacturing and metallurgy companies in Pennsylvania and New Jersey. Bob was a devoted Christian, husband, and father. His passions were his wife, his children and grandchildren, and service to others. He was active in his church as a youth leader and deacon. He enjoyed vacations with his family at the Jersey Shore and in Down East Maine. Bob is survived by two daughters, Ruth Ellen Patterson (Thomas) and Kathleen Thomas (Kenneth); three sons, Robert Troxel (Dolores), John Troxel (Janet), and David Troxel (Rita); beloved grandchildren Amy, Sara, Mary, Kaitlyn, Emily, William, Connor, Colleen, Kenneth, Ava, and great grandchild Luca. Bob was predeceased by his wife of 66 years, Jeane, who died just 2 weeks prior on January 28, 2022. He also was predeceased by his brother Henry C. Troxel and his sisters Violet C. Myers and Dorothy M. Moser. A joint Memorial Service will be held for Robert and Jeane Troxel at 11:00 am on Saturday, March 12, 2022, at Wiley Church (Wiley Christian Retirement Community), 101 E Main St, Marlton, NJ 08053. In lieu of flowers, donations may be made in Bob’s memory to Harvey Cedars Bible Conference, 12 Cedars Avenue, Harvey Cedars, NJ 08008 (www.hcbible.org/give). Arrangements by BOUCHER FUNERAL HOME, Deptford. For condolences visit www.boucherfuneralhome.com.

The family of Robert C. Troxel created this Life Tributes page to make it easy to share your memories.

Send flowers to the Troxel family.