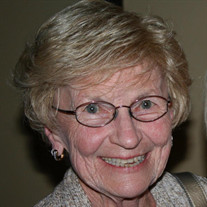 Born on July 7, 1933, to Frank and Isabelle Bove. She was the eldest of two children. Sophie grew up in South Philadelphia. She attended Hallahan High School, graduating in 1951. She joined the work force as a Bank Teller. She met her husband (Bill) at a Fort Dix dance social. He was a Medic in the Army, and heading off to Korea. Something clicked. They wrote to each other regularly while he was in Korea. Bill’s letters always ended with a joke (no surprise). Bill came home in 1953, and the relationship blossomed. Sophie and Bill married in September, 1955, and moved in with her parents on Packer Ave., in South Philly. They had a son (Bill Jr.) in 1956; followed by a daughter (Isabelle) in 1958. In 1960 Sophie and Bill made the jump to the suburbs of New Jersey, buying a home in Deptford. Their third child (Deborah) arrived in 1962 to make the family complete. While her children were growing up, Sophie’s life was one of service to her family and the community. She made certain that the family had what they needed, and got to where they needed to be. She was tireless when it came to cleaning the home. And there always seemed to be something cooking in the kitchen. Whether it was the pot of gravy on Sunday, or the twenty plus varieties of cookies that she made almost non-stop from Thanksgiving to Christmas. She ruled in the kitchen. Holidays and birthdays were always happy events filled with family and friends, joy, laughter, gifts, and food (lots of food). She drove the family “taxi”. Whether it was taking Billy to baseball practice, or the many trips per week taking Belle and Deb to dance class, Sophie seemed a fixture behind the wheel of the family station wagon. In the community, Sophie was always volunteering to head, or work on, some fundraiser. From jewelry sales to fashion shows, somehow Sophie was able to pull them off, with flair. As the children got older, and started leaving the nest, Sophie found herself back in the workforce, again as a Bank Teller in Woodbury. And then… In 1989 Sophie and Bill made the move to Ocean City, NJ. It was always her dream to live at the shore. She transferred to a bank in OC; Bill was already working at Resorts Casino in AC. Along the way the children married, and the next generation was born. That just gave Sophie more birthdays to prepare for, more opportunities to shop (she would have easily won gold if an Olympic event), and more food to make (if that was even possible). She was always up for the challenge. Sophie and Bill finally officially retired when both were in their 70’s; although Sophie enjoyed a part-time job at Henry’s on the OC Boardwalk. They spent more time with friends and family. They were part of a group of friends who took Happy Hour quite seriously. They traveled: Italy, the Caribbean; a cruise to Alaska; Sophie even flew to Paris with her girlfriends for an extended weekend! And, of course, the next generation arrived. Sophie was in her glory. Sadly, Bill passed in November 2018 of a heart condition. Sophie began her losing struggle with Alzheimer’s shortly thereafter. She passed peacefully on the morning of September 30, 2021, her three children by her side. Sophie is survived by her - Three children: Bill (Donetta) Marconi; Isabelle (Joe) Sacerdote; and Debbie (Sam) Cavallo; Eight grandchildren: Sarah Marconi; Meredith Williamson (Chris); Samantha George (Zach); Kristin Steen (Brian); Mary Beth Sacerdote; Joseph Sacerdote (Alana); Mike Cavallo (Erin); and Alyssia Cavallo (Angie). Nine great grandchildren: Levi Williamson, Felix Williamson, Greta George, Otto George, Brayden Steen, Khloe Ensign, Nina Sacerdote, Joseph Sacerdote, and Kian Cavallo. And her brother, Frank Bove (Ann) In lieu of flowers, a donation to your local Alzheimer’s Association is requested by the family. Relatives and friends are invited to a visitation on Wednesday, October 6, 2021 from 7pm to 9pm in The Chapel at BOUCHER FUNERAL HOME, 1757 Delsea Dr., Deptford, NJ 08096 and Thursday, October 7, 2021 from 9:30am to 10:30am at The Catholic Community of the Holy Spirit (Mullica Hill Parish Center), 17 Earlington Ave., Mullica Hill, NJ 08062. A Mass of Christian Burial on Thursday 10:30am at the church. Interment private. For directions, to sign online guest book and to view Sophie’s Video Tribute visit www.boucherfuneralhome.com. CDC NOW ADVISES UNVACCINATED AND FULLY VACCINATED PEOPLE WEAR MASKS INDOORS.

Born on July 7, 1933, to Frank and Isabelle Bove. She was the eldest of two children. Sophie grew up in South Philadelphia. She attended Hallahan High School, graduating in 1951. She joined the work force as a Bank Teller. She met her husband... View Obituary & Service Information

The family of Sophie A. Marconi created this Life Tributes page to make it easy to share your memories.

Send flowers to the Marconi family.