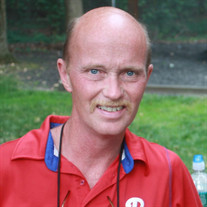 William C. Griffith “Bill”, 60, of Deptford, New Jersey, took his last breath on earth and first in heaven on Friday, April 13th, 2018. Bill was born to George Griffith, Sr. & Anna (nee Reilly) Griffith on February 12th, 1958. Bill spent most of his life in Deptford, where he ran a successful glazier business, “Bill The Glassman,” out of his home and shop for over thirty five years. He was a hard worker, but when his family and friends could get him to relax, he enjoyed fishing, camping and painting. Bill was a loyal man and known by family and friends to give you the shirt off his back or lend a hand in any way he possibly could. He loved his family well. Bill will be incredibly missed by the love of his life and wife of 36 years, Merry (nee Ryan) Griffith, his daughter Angela (nee Griffith) Hobbs and son-in-law Mark of Lancaster, PA, along with his three grandchildren--Julianna, Jaxon & Jeremiah--who adored their PopPop. He will be forever cherished by his sister Joan (nee Griffith) Mullin of Sicklerville; his brother George Griffith Jr. and wife Jackie of Florida and his brother and sister-in-law, Bob & Bobbie Hughes of Turnersville. Bill is also now joyfully reunited with his son, Ryan Griffith. Bill will be missed by many loving family members and friends that were like family. Relatives and friends are invited to a visitation on Saturday, April 28, 2018 from 1:30pm to 2:30pm in The Chapel at BOUCHER FUNERAL HOME, 1757 Delsea Dr., Deptford, NJ 08096. Memorial Service 2:30pm in The Chapel at the funeral home. Interment private. In lieu of flowers donations may be made to The 900 Project, https://ww.the900project.org. For directions, to sign online guest book and to view Bill’s Video Tribute visit www.boucherfuneralhome.com.

The family of William C. Griffith created this Life Tributes page to make it easy to share your memories.

Send flowers to the Griffith family.