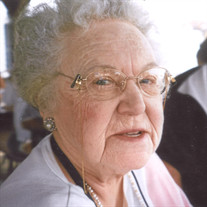 Zelda (nee Long) Fischer was born July 5, 1910. Zelda settled in Newport Township (Glen Lyon) via Hunlock Creek where she was born to James and Lennie (Talcott) Long. Raised in a loving home with her father, mother, two brothers, Henry “Hank” and Clifton, and two sisters, Clarissa and Rhea, she experienced "a lot of good food, fun and laughter. Zelda attended school in a one-room schoolhouse heated by a potbelly stove which was strategically placed in the center of the room for maximum warmth. When thirsty, students drank water from a bucket with a long-handled dipper. After graduating from the eighth grade, Zelda passed the county eighth grade exam and entered high school in Kingston, Pennsylvania where she lived for the next three years with an aunt and uncle. She graduated in 1928. Zelda continued her education when she entered the Nanticoke State General Hospital Nursing Program, which included obstetrical training at the Elizabeth Steel-Magee Hospital in Pittsburgh. In September 1931, she passed the state boards and began working as a registered nurse (RN). About one year later, she began post-graduate studies in surgical and operating room nursing at Bellevue Hospital in New York City. She returned to Nanticoke State Hospital in March 1933 where her promised nurse supervisory job was on hold for her, and she stayed until January 1934. While at Nanticoke State Hospital, a fellow nurse, Viola Fischer, suggested Zelda go on a date with her brother, Wilbur G. Fischer. They married in August 1933 and lived in Glen Lyon for 42 years. They had one child, a daughter, Lorna. Wilbur taught English and Social Studies at Pulaski Junior High School in Glen Lyon. He and Zelda had strong Christian roots and were active in their community and the Glen Lyon Methodist Church. Wilbur was a Mason and Zelda belonged to the Order of the Eastern Star. Wilbur passed away in 1982 just shy of their 50th wedding anniversary. During the years between 1930's and 1960's when Zelda lived in Glen Lyon on South Market Street, she made many friendships through her work and community involvement which she loved. In the mid 70’s, Zelda and Wilbur moved to Deptford, New Jersey to be close to Lorna and her family. As a student and teacher of The Bible, Zelda showed tremendous insight about The Bible and the Holy Land as she went on a trip in 1984 to Israel, Jordan, and Egypt. After her trip, she stated, "It was truly a once in a lifetime opportunity. Where else would I ride a camel?" In 2015, Boston Medical Center, a teaching affiliate of Boston University School of Medicine, approached Zelda and Lorna with an interest in doing research in the "Genetics of Longevity." In Zelda's case this study was a rare and important opportunity to discover critical information about devastating age-related diseases such as cancer, Alzheimer's disease, and heart disease. Components of the study would involve data about Zelda's health and medical history. It goes without saying that Zelda was a woman who was intensely proud of her family and their accomplishments. Her grandson Ken and his wife, Denise reside in Fredericksburg, VA, as does Zelda's great grandson Kenneth Ryan. Her great granddaughter Lauren, lives in Outer Banks, North Carolina. For the past 20 years, Zelda lived at the Pitman Manor in New Jersey until her passing, and will be solely missed by her family and friends. Zelda A. Fischer (nee Long) on February 22, 2018 of Pitman Manor, formerly of Deptford, NJ and Glen Lyon, PA. Age 107. Wife of the late Wilbur G. Fischer. Mother of Lorna M. Manahan of Deptford. Grandmother of Ken Manahan of Fredericksburg, VA. Great Grandmother to Kenneth Ryan Manahan of Fredericksburg, VA, and Lauren Manahan of Outer Banks, North Carolina. Relatives and friends are invited to attend a visitation Saturday, March 3, 2018, 9:30am to 11am at Almonesson United Methodist Church, 1680 Almonesson Rd., Deptford, NJ 08096. Funeral Service 11am Saturday at the church. Interment Monday, March 5, 1pm at Oak Lawn Cemetery, Wilkes-Barre, PA. In lieu of flowers donations may be made to Almonesson Church or Pitman Manor, 535 N. Oak Ave., Pitman, NJ 08071. For directions, condolences and to view Zelda’s Video Tribute visit www.boucherfuneralhome.com.

The family of Zelda A. Fischer created this Life Tributes page to make it easy to share your memories.

Send flowers to the Fischer family.